THE ZIONIST ISRAELIS ARE THE REAL TERRORISTS AND THE DEVILS FORCES!: 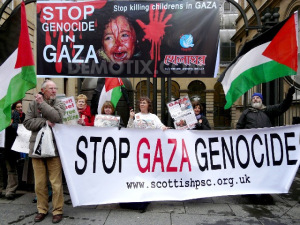 The Israeli genocide of innocent Palestinians continues. The world is watching it and doing nothing to stop it. (Photo: http://www.islamiccentre.ie)

THE ZIONIST ISRAELIS ARE THE REAL TERRORISTS AND THE DEVILS FORCES!: ZIONIST FORCES COMMIT GENOCIDE AGAINST POORLY DEFENDED PALESTINIANS AND CREATE HOLOCAUST IN GAZA

What we are witnessing in Gaza, Palestine right now is the Zionist forces are committing extreme aggression and genocide against poorly defended Palestinians in the blockaded Gaza. The Zionist war machines can go anywhere in Gaza without facing equal or substantial armed defenders.

The Zionists war planes can also fly anywhere in the Gaza airspace freely hunting for Palestinian freedom fighters without being afraid of being hit by anti-aircraft guns because Palestinians have no radars and nor air defense system. They also don’t have tanks, armored vehicles and the other modern weaponry to counter the Israeli military might.

“What [Palestinians] are [saying] is…